In her poem “To a Daughter Leaving Home,” Linda Pastan describes her experience of teaching her eight year old daughter how to ride a bike.  As her daughter rides away up the street, the mother runs behind to catch up, anxious she might hear a crash.  Her daughter laughs and “pumps for her life,” with her hair like a “handkerchief waving goodbye.”

This scene illustrates many of the feelings that parents have as they see their children growing up.  On the one hand parents want to encourage independence, and work to teach children the skills they need to be self-sufficient.  On the other hand, children’s independence can scare parents: will they be alright on their own?  The child’s journey can also leave the parent feeling abandoned.  As parents cheer their children on, they also feel the loss of their company. 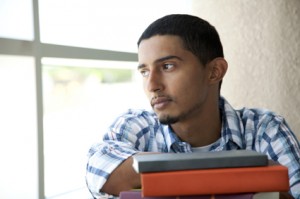 These mixed emotions are present as soon as children take their first wobbly steps, but they increase exponentially as teenagers become more independent, and begin to make plans for living on their own.  The bicycle soon turns into a car, which is both more dangerous and capable of taking a child further away.   Feelings of pride, fear, and loss are intensified for parents.

Teenagers are aware that they are in the final stages of their childhood, and they are also likely to feel mixed emotions.  Although excited about growing up, they might also be fearful about the prospect of managing on their own, and they may feel sad about leaving their childhood behind.   They do many things to try to cope with these feelings, including “practicing leaving home” by making their own decisions about their lives, and focusing intensely on their peer friendships.   While parents may worry when their children make mistakes, it may be helpful to think of the high school years as a time when young people do a “dry run” of being on their own, while within the safety of their parents’ home.

Adolescence is also a time when teenagers discover ways that they are different than their parents, so they can find an identity that suits them as they go out into the world.  Sometimes this process can be inelegant, and teenagers may be harsh in their criticism of their parents.  Parents need to not take the comments their teen makes over-personally, and realize that this is their teen’s clumsy way of saying that they are their own person.

Once teenagers are more confident about their ability to be on their own, they can re-establish a different kind of relationship with their parents.  As adults, they likely will not feel as much of a need to push away.   Leaving home is a process that takes time and patience, and the relationship you have established with your child throughout will provide her with the security she needs to transition to adulthood.