When my kids were little, whining ranked right up there as one of my least favorite of their behaviors. I certainly struggled more with how to handle tantrums and worried more about school issues, but when my kids whined at me, it pushed my buttons the way other things did not. Like finger nails on a black board, it just got to me. 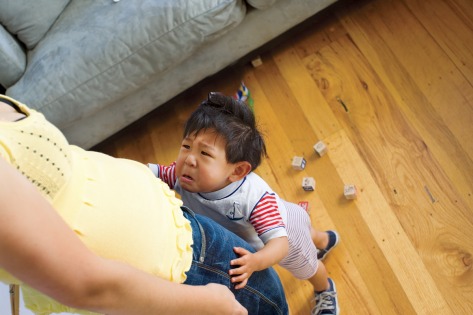 You know what I mean by whining? Those self-pitying words and phrases designed to communicate helplessness and make parents feel sorry for the whiner. But words alone aren’t enough; the delivery is critical. The tone of voice is higher-pitched, irritating, nagging, or pitiful. It can be a soft whimper or a loud, incessant demand. Facial expressions are sad and body language communicates dejection. Younger children may be clingy and there may be tears. In older ones, there may be backtalk, too. I’m sure if I asked you to, you could demonstrate whining, sitting right there, reading this blog. But please don’t, thank you anyway, because another characteristic of whining is that it’s contagious.

The most important thing to remember about whining is that children use it because it works. And it works even though parents hate it. Whining gets the whiner what they are asking for—whether it’s getting their way or getting a parent’s attention. So it doesn’t really matter how many times a parent yells, nags, lectures, or whines at a child to stop whining; if whining is effective in getting a child what they are seeking, they will continue to use it.  And when the parent engages with the whining, that response, no matter how negative, is attention, so if they are whining for attention, it has already succeeded.

Before you change the way that you respond to whining, prepare your child by informing him that you are no longer going to hear him whenever he whines. Pick a time to have this conversation when he isn’t whining and you aren’t irritated. Make sure that he knows what you mean by whining. Maybe even ask him to demonstrate it. This can be done in a playful way, just be careful to not be disrespectful or belittling of him. Tell him that when he whines, your answer will always be “no.” Don’t phrase this as a question or a discussion; it is a statement of information.

WHAT NOT TO DO

After that, when your child whines, do not explain what you are doing (“I am ignoring you!”?) or why; she already knows. Do not try to reason, lecture, plead, or scold. That is giving the whining attention. Do not ignore, ignore, ignore until you can no longer stand it and then give in. When we give in, even 5% of the time, it teaches our children that they just have to whine longer, louder, and more persistently the next time. Do not give second chances in the moment; this is another form of “giving in.” However, second chances at a later time are great. “We can try again tomorrow,” encourages a child to grow and change and do better.

Do not make excuses for your child, such as he’s hungry or tired. If he is struggling with something, you can simultaneously not give in to the whining demands … and feed him or give rest time. If we give in sometimes and not others, it conveys a very confusing message to our child. He will wonder, “Is whining accepted or isn’t it? Since I’m not sure,and it’s been very effective in the past, and it’s something I’m good at doing, I am going to keep on using it.” This is not the take-away message we want to communicate.

Do not retaliate or try to humiliate your child out of whining. It won’t work and instead you will have a whiner who is also hurt or angry. This will only lead to more whining because she feels too discouraged to try anything else.

When a child is whining for some form of attention, direct your attention elsewhere. Be busy doing something, or at least look as if you are busy, even if it is hard to concentrate over all that whining noise. Leave the room, sing a song, be occupied with your phone. Do what you need to do to soothe yourself. Deep breathing can really help. When the whining stops you can redirect your attention back to your child.

With a child who is whining to get his way, set your limits and stick to them. Since the whining makes that hard to do, set only those limits that you are willing to consistently uphold.

When your child whines in a public place, leave if possible. You will have difficulty ignoring the whining when other people are around, hearing and seeing you and your child. Therefore, simply take her and go, without discussion.  This may be inconvenient, but you will not have to do it many times before the message is communicated that not only will whining not be effective, but it will put an end to the excursion.

A child who whines for attention or power, probably needs more attention or more say in their life. So at the same time as we withhold it when inappropriately asked (i.e., whining), it is important to find ways to give more appropriate attention or more appropriate power. Allow opportunities during pleasant times to reasonably discuss the issues being whined about and to problem-solve together how to address them. Model positive, respectful ways to communicate and use them when talking with or listening to him. Make sure that she gets some of your undivided attention each day. Take time to be affectionate and to work and play together. Are there places he can have more control over his life? Teach him new skills and give him opportunities to use them. Find ways that your child can contribute to the family, such as growing herbs in a window pot or vegetables in the garden, making delicious cookies, hosing down the car, or whatever might fit with her interests.

Although the theory behind ending whining is simple, I didn’t find it very easy to carry out at first. It can be hard to change our interaction patterns. But after not too long, I was able to pull it off, and what a difference it made! Once whining no longer “worked” for my kids, they stopped resorting to it, and it ceased to be an issue in our household. If you are struggling with whining, I highly recommend you go for it, too.

Whining: 3 Steps to Stop It Before the Tears and Tantrums Start by Audrey Ricker and Carolyn Crowder (2000)