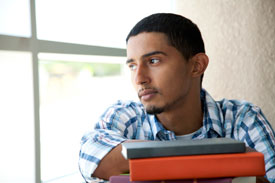 Early symptoms of depression can be difficult to diagnose because they appear to be a normal part of the difficulties adolescents face. A teen may be depressed if he experiences an unusual degree of the following symptoms:

Depression can result from a confluence of factors, including personal experiences such as the death of a loved one, conflicts in the family, a move to a new area, a breakup with a boyfriend or girlfriend, abuse and bullying, or an event such as rejection or failure. Teens that have experienced abuse or neglect early in life tend to be vulnerable to depression as they get older. Some people have a biological predisposition to depression, and some medical conditions such as hypothyroidism can contribute to depression.

Depression can contribute to drug and alcohol use as teens attempt to self-medicate their symptoms. It can also result in agitation, aggression, self-injury, and suicidal thoughts or suicide attempts.

Parents can do much to assist their depressed teens. They can let teens know that they are concerned and available to talk, and gently encourage them to become involved in social or recreational activities that they enjoy.

Psychotherapy can be an effective method for treating depression in teens. Therapy typically results in decreased symptoms, increased self-esteem, and enhanced social and academic functioning. Family involvement in the therapy usually generates quicker and greater improvements, and can also improve family dialogue and generate a more healing family atmosphere. Teens can also benefit from group therapy, which can be an excellent method for developing social skills and greater confidence.

Treatment should begin with a complete medical exam followed by an assessment from a qualified mental health professional. It is important to address alcohol or substance abuse in conjunction with any mental health treatment. If a depression is severe, it is also important to obtain an assessment from a psychiatrist to consider the options for treatment with psychotropic medications.

>> More information on teens and depression